In his fifth solo exhibition at Fleisher/Ollman, Tristin Lowe continues to mine the poles of the profound and the everyday. Tiny Bangs is inspired by the sublimity of Earth’s origin hypothesis—the Big Bang—but brings things down to earth. For Lowe, tiny bangs are the myriad ways life is conceived, matter is transformed, and energy is released. Here, Lowe explores the building blocks of human identity: the double helix of our DNA and the sexual differentiation of chromosomes represented through recycled family blue jeans, sewn together one on top of the other creating towering objects entombed by and stiffened with epoxy resin, rubber, and paint. One lone pair of dungarees retains its suppleness and springs to life dancing a jittery dance triggered by a jerry-rigged fan installed in its waist. The animating energy of blown air is a Lowe trademark, explored in a variety of past sculptures from a giant Alice (1998/2011), to a life-size albino sperm whale, Mocha Dick (2009), to Dumbo (2001).

Rendering the release of energy is another way Lowe envisions tiny bangs, evident in phenomena including waves, explosions, and absurd fight scenes. Ocean waves are a prime example of how energy is experienced as both benign and terrifying: small beach breaks lapping at our knees as we wade in the surf during summertime; typhoon waves and tsunamis on the more destructive side of the spectrum. Lowe celebrates the wave in all its multivalent glory using his most elegant medium, neon, presenting a large, wall-based illuminated work that can be read as both drawing and sculpture.

Explosions and cartoon-like dust-ups are still other variations of energy unleashed that Lowe plays with in the exhibition. Fiery explosions take shape in neon and cut aluminum. Spheres of limbs brawling inside dust clouds appear as glass objects, drawings on paper, and disembodied arms and legs carved from foam and installed as if limbs have punched and kicked through gallery walls.

The glass dust-up sculptures are joined by an array of other works made in the same medium. Designed by Lowe and fabricated by glass artists at Wheaton Arts in Millville, New Jersey, these objects conjure primordial creatures that rely on more primitive senses like scent and touch (antennae, noses, and tentacle-like projections are dominantly featured)—perhaps the progeny of bangs both big and tiny. Lowe will be featured in the exhibition, Emanation, at Wheaton Arts, April 2–December 31, 2019.

Lowe received his BFA from Massachusetts College of Art and studied at Parsons School of Design and Skowhegan School of Painting and Sculpture. He has exhibited his work extensively in Philadelphia at venues including the Fabric Workshop and Museum, the Philadelphia Museum of Art, the Institute of Contemporary Art, University of Pennsylvania, Fleisher/Ollman, Vox Populi, Girard College, and the Rosenbach Museum and Library. He has exhibited nationally and internationally at University of Michigan Museum of Art, Ann Arbor; Rhode Island School of Design Museum; Virginia Museum of Fine Arts; Museum of Contemporary Art, Jacksonville, FL; Royal Hibernian Academy, Dublin; New Langton Arts, San Francisco; Museum of Contemporary Art, Sydney, Australia; and the Centre d'Art Contemporain, Switzerland. He has been awarded a Smithsonian Artist Research Fellowship, a Pew Fellowship, Provincetown Fine Art Work Center Fellowship, and the Fabric Workshop and Museum and Girard College Residencies. He was co-founder and co-director of the non-profit gallery Blohard. Lowe's work is in the collection of the Philadelphia Museum of Art; the Pennsylvania Academy of the Fine Arts; the West Collection, Oaks, PA; and the US Embassy, Moscow, Russia, Art in Embassies, US Department of State.

Matt Singer speaks to Tristin Lowe in The Artblog. 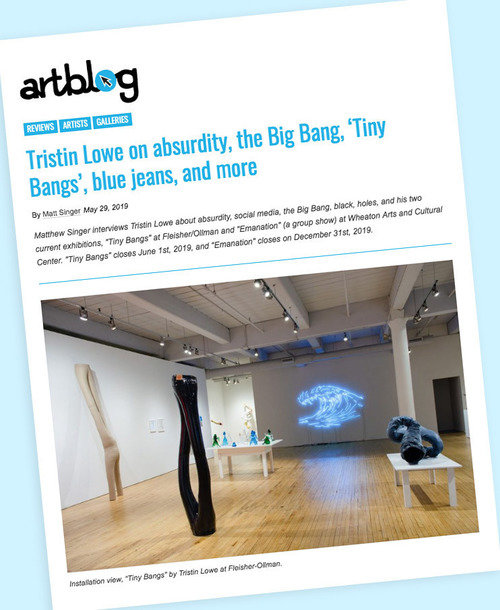 From whale to waves

Edith Newhall on Tiny Bangs in The Philadelphia Inquirer 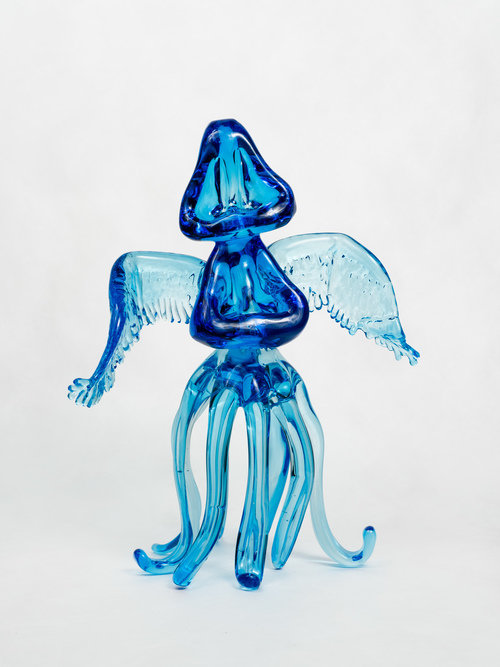