This exhibition will provide a sampling of the breadth of work made by Eugene Von Bruenchenhein (1910–83), the Milwaukee-based, self-taught artist, active from the early 1940s through the early 1980s. Living in a modest house, which served as both a studio and exhibition space, with his wife and muse, Marie, he created a world of highly original beauty steeped in an idiosyncratic synthesis of non-Western art and architecture, girly magazine archetypes, theories of cosmic genesis, and current events like the Cold War fear of nuclear annihilation. Time Produced Non Better presents Von Bruenchenhein’s signature ceramics; a selection of paintings of imaginary architecture and fantastical botanical imagery; pinup-inspired black and white photographs of his wife; and rarely seen 35mm color slides of Marie and arrangements of completed art works photographed in the artist’s backyard, presented in a slideshow format.

A 1947 hand-colored photographic self-portrait by Von Bruenchenhein is inscribed by the artist’s hand with the following: “Edward the first king of lesser lands/Time cannot touch/He moved ten centuries/A fortress of good/Time Produced non [sic] better.” While we can surmise that this statement is an homage to his father, Edward, the text’s superimposition on Von Bruenchenhein’s own image suggests his belief in his own greatness, a kind of icon of self-proclaimed genius. One might be struck by the artist’s self-confidence—after all, he was a man of lesser means, a baker who lived frugally (he began the profession in 1944, shortly after marrying Marie, and retired in 1959 due to health reasons). His steadfast ego belied the fact that he remained unrecognized as an artist outside of his family and close friends, rarely exhibiting his work during his lifetime, though his practice spanned more than four decades. In order to make his art, however unacknowledged that pursuit was, he inhabited two different worlds—one workaday and the other a realm of artistic fantasy. The latter was made real through a tireless nocturnal work ethic, in which he sometimes collaborated with his wife Marie.

His interest in a wide-range of ideas, from the origins of the universe to Asian architecture to poetry and philosophy to amateur archaeology and horticulture, beget a staggering range and number of works. Von Bruenchenhein photographed his wife in a variety of erotic and exotic poses and contexts—part pin-up girl, part princess. He created ceramic sculptures including crowns, vessels composed of leaf patterns, and delicate flowers—all made from clay sourced from local construction sites, fired in the couple’s small parlor stove, and often spray-painted with automobile enamel. He made chicken bone towers inspired by both Khmer temples discovered in the pages of National Geographic as well as Sam Rodia’s Watts Towers, which he read about in his local newspaper. He created sculptures of mask-like heads made from concrete which he displayed outdoors. He painted fiery energy bursts conjuring epic events like cosmic genesis and the birth of otherworldly creatures with homemade brushes, his own fingers, sticks, bits of cloth, and combs. Later in life, Von Bruenchenhein focused his efforts on paintings of visionary architecture, echoing his bone towers as well as the leafy arches of his earlier clay vessels.

Von Bruenchenhein, along with several other self-taught artists, is featured in the 2013 Venice Biennale, The Encyclopedic Palace, June 1–November 24, and was recently included in The Alternative Guide to the Universe, Hayward Gallery, London, Summer 2013, and Great and Mighty Things: Outsider Art From the Jill and Sheldon Bonovitz Collection, Philadelphia Museum of Art, Philadelphia, Spring 2013. 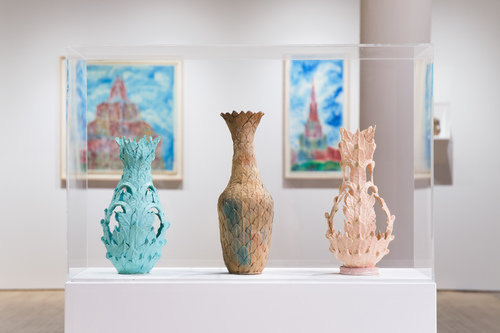