Good Funky Miles is a group show explicitly designed to sustain and embolden bored, wilting spirits through the grittiest hours of high summer in the city through the work of four men who don’t know each other and who you may not yet know. Andrew Herman is an actuary for the electric company whose flawless and total map drawings of entirely invented cities rendered in an unfussy, office-supply vocabulary–a practice in progress for over 25 years–will be exhibited for the first time. Dan Murphy is the co-founder of Megawords, an internationally lauded crucible for global eye-opening and community building in print, audio and video, contributes a video compilation and installation of urban typologies, a young life’s work manifest in 4x6 drugstore prints. This is a first for a man whose bread and butter has until now been ’zines and what we’ll loosely call street work. We are delighted to again show the tender, organic cardboard and sculptamold work of Thomas Vance, one of Philadelphia’s most industrious and sophisticated young sculptors, a serene soul and quietly rigorous formalist. And delight don’t suffice to describe our new friendship with Michael Heath, a London-based cartoonist who sold his first ink drawings, reductive portraits of Bird and Monk, to the Melody Maker in 1953. His throbbing, black visions of contemporary London, best known from satirical stalwart Private Eye magazine, have never before been exhibited in a fine art context.

Good funky miles are the ones that belong to you. Maintain your citizenship of the global village–everyone loves it here (it’s awesome!)–but know there’s no way, none, to replace the route you built in your city, that line through the pigs, and the cranes, and the things everyone can afford, and the alcoholics, and the animal-rights activists, and the things no one should buy, and the monuments, and the Muslims, and the brats, and the walking dead, and the rip-offs, and the ruins, and the radio, and the robbers. It gets funkier every day. Man oh man, how did you plot that beautiful line?

"Good Funky Miles," FOG's summer show, it's a poem it's up and it looks lovely. In other less horn-blowing news, gallery artists Anthony Campuzano and Felipe Jesus Consalvos have works in the group show "Text Messaging" at Adam Baumgold Gallery, uptown in Manhattan. The show will be up there until August 15th. "Good Funky Miles" will be up until the end of July, and we'll reopen proper on 19th September. Thanks again! 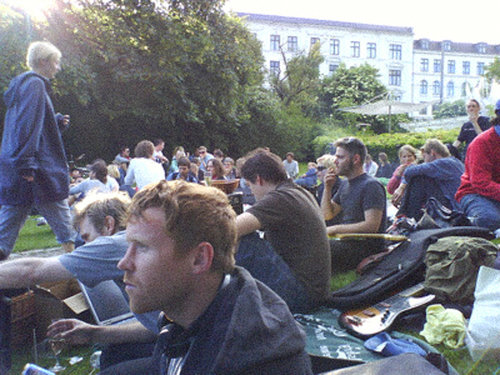