b. 1959, Philadelphia; Lives and works in North Wales, PA

Born and raised in Philadelphia and its outskirts, Andrew Herman has been drawing maps of imaginary cities since he was a child. The drawings are of executed at atlas-level detail with common office supplies. Schooled primarily in drafting and design programs in and around Philadelphia, he began working for a local utilities company in the 1980’s, where he is currently the principal analyst in the “Department of Document Services.” He continues to draw in his spare time.

Herman’s drawings were exhibited for the first time in 2007 at ArtChicago and The Intuit Show.

Andrew Herman's work can be seen in Nowhere: Selections from the Archives of the Hand Drawn Map Association at Arcadia University Art Gallery. The show is on view from September 23 until November 7.

The Hand Drawn Map Association (HDMA) is an ongoing archive of user-submitted maps and other diagrams created by hand. The collection includes examples ranging from spontaneously rendered directional maps to those charting fictional sites and unusual places, including drawings by historical figures such as Abraham Lincoln, Ernest Shackleton and Alexander Calder. 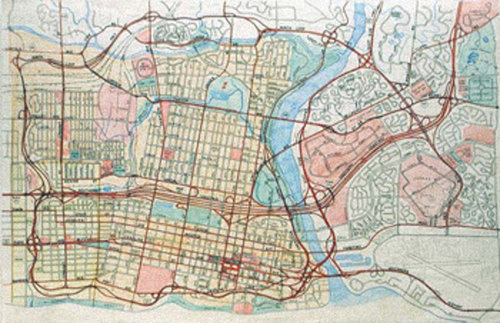