The long, hot summer months bring an exhibition of works selected by Will Oldham, the prolific singer-songwriter who most often records and performs under the moniker Bonnie Prince Billy. Frenz, on view June 18 through the end of the summer, will include the work of artists: Shary Boyle, Able Brown, Lori Damiano, Kyle Field, Jill Gallenstein, Sammy Harkham, Alan Licht, Ashley Macomber, Joanne Oldham, Leslie Shows and Spencer Sweeney.

The exhibition started with a simple thought—to ask Will Oldham, whose music is visually rich and albums are artful, lovely objects, to select the work of contemporary artists whom he finds compelling. It seemed likely that visceral connections would arise between Oldham's intuitive practice and diverse interests (in addition to his musical endeavors, the artist has taken turns in numerous independent films, has appeared in videos with both Kayne West and R. Kelly, and has performed stand-up comedy) and those of Fleisher/Ollman. Both Oldham and the gallery seem to have one foot firmly rooted in the mainstream and the other deeply planted in the margins. Both have voices that are distinctly vernacular and elusive, falling happily between the cracks of any definable genre or category.

What resulted is Frenz, a cacophonous exhibition fueled by the work of eleven artists, working nationally and internationally.

Snippets of cartoons, pop references, text, disembodied limbs and prismatic passages of toxic color aggressively coexist with good old-fashioned abstraction in Spencer Sweeney's nearly psychedelic paintings. These works, like the artist himself, show a complete disregard for convention and consistency of identity (Sweeney is known for his assumed personas and provocative performances as a former member of the anti-band Actress) and serve as a nice touchstone for the show with their almost violent beauty and lyrically poetic, but elusive moments.

Able Brown, part-time comedian, full-time Park Ranger, and life-long drawer, makes immediate observational sketches of nature and of man. The artist jots down seemingly insignificant bits of language and events—people's conversations and habits, signs, personal thoughts, names of pets, passages from library books—and uses these texts to fuel his crude and sometimes rude drawings, which the artist refers to as "things he wants to see." The resulting works, such as "Serena Williams Hanging Ten in Oahu", are inventive, absurd and generous.

Along with Brown's nearly twenty drawings, Kyle Field's intimate ink and watercolor works share an affinity for cryptic bits of language and non-sequitur information. Field absorbs content from life's daily uproar and blends vague narratives that can be read in all directions. Each of the works explores the intersection of nature, commerce, and community through the convergence of personal experiences, inside jokes and imaginary creatures.

Jill Gallenstein's paintings and drawings explore symmetry and patterns found in nature, providing an overall world view assembled from small, local vantage points. For Frenz, the artist has created a three-part pen and ink drawing, "inside my broken heart is a pocket for you" which perfectly presents the artist's exploration of space/time and order/chaos, with meticulous, elegant detail.

The four bodily humours are the central characters in Leslie Show's four collaged prints. The ancient theory of blood, yellow bile, black bile and phlegm, believed to influence one's health, personality and temperament, is closely related to the theory of the four elements found in nature—earth, fire, water and air. These thunderheads of the humours enable us to make connections between psychological states and the phenomenal world, between body and landscape.

Sammy Harkham, the author of the comic series, Crickets and Poor Sailor and editor and publisher of Kramers Ergot, one of the most influential comic anthologies published today, will have his zines, strips and original drawings on view.

Lori Damiano's "Lord I: The Records Keeper" follows the journey of Lord I, a records keeper by trade, who is devoted to documenting and classifying all she encounters. This sublime and thoughtful hand-drawn animation, six years in the making, comments on mediated experience and the struggle between awareness and distraction.

Joanne Oldham has been making powerful collages from collected images for over 30 years. Her work employs repetition, pattern and space to create central images that read as both narrative and portraiture. While her works have been exhibited only once at Family Bookstore (Los Angeles), Oldham's visionary works have been seen widely on the covers of "I See A Darkness" and "Lie Down in the Light."

Alan Licht, musician, composer and author, is represented here with a sound piece, "A New York Minute," which consists of spliced together New York City weather reports, one from each day of January 2001. The 15 minute long piece speaks to the futile exercise of predicting the weather and comments on the limited range of day-to-day activities and the narrow ways in which one can articulate those differences.

Ashley Macomber's humorous, dark and imaginative paintings present archetypal images of cheerleaders, wolves, and clowns, out of context, making murky associations and revealing the power and ambiguity of sexuality.

Frenz will be on view at Fleisher/Ollman through August 29.

For images or more information on the exhibition, please contact Amy Adams or Claire Iltis at 215.545.7562.

Art to Make You Laugh (and Cry)

"Nicely fed, I walked over to the Fleisher/Ollman Gallery, a 47-year-old center for the work of self-taught artists which has also, since 1997, focused on contemporary artists whose work reflects the influence of such outsider art. The show on view, “Frenz,” which ends on Saturday, is a good, oddball one, with pieces by 11 artists who were chosen by the indie musician Will Oldham."

Read the rest of the article here 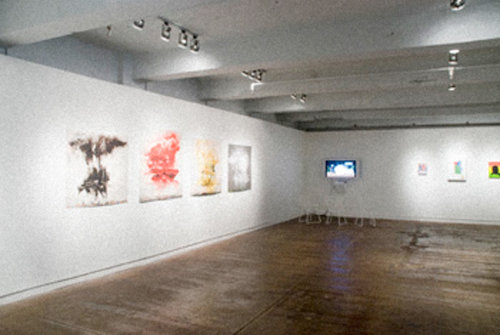